Black Friday is not only the day after Thanksgiving, but also traditionally the kick-off day for the Christmas shopping season. However, Black Friday isn’t merely a U.S. phenomenon. In fact, European retailers have implemented the idea of heavy discounts in hopes of higher sales volumes. Notably, Germany is the country on which Black Friday discounts have the lowest impact. During the last years, the concept of Black Friday has been extended to sectors as diverse as fashion, banking and tourism, however, the most successful one is still the sector of consumer electronics. But how do this kind of aggressive promotions affect specific lifestyles like those of runners in different countries?

Epinium, the leading company for market research based on Big Data, did an interesting market study analysing the impact of 2017’s Black Friday edition on the running gear market of the main ecommerce markets in Europe: France, Germany, Italy, Spain, and United Kingdom.

In Germany, Black Friday has the lowest impact on the yearly total sales and Germans were least influenced by promotions

According to Epinium’s study, in Germany, Black Friday had the lowest impact on the yearly total sales compared with the other countries, that is, less than 4,5% sales increase during the Black Week. In Spain Black Friday sales represented 6% of the yearly total sales. Additionally, German runners were least influenced by Black Friday discounts, that is, during the promotion period, they spend on average more or less the same than before/after promotions. In comparison, Spanish runners were most influenced by promotions spending 37% more, as they tended to buy more expensive products than they used to buy. They are followed by French runners, who spent 15% more.Italian runners are the only ones, who have really saved money thanks to Black Friday discounts. They saved 18%, because they continued buying the same products, but at cheaper prices. 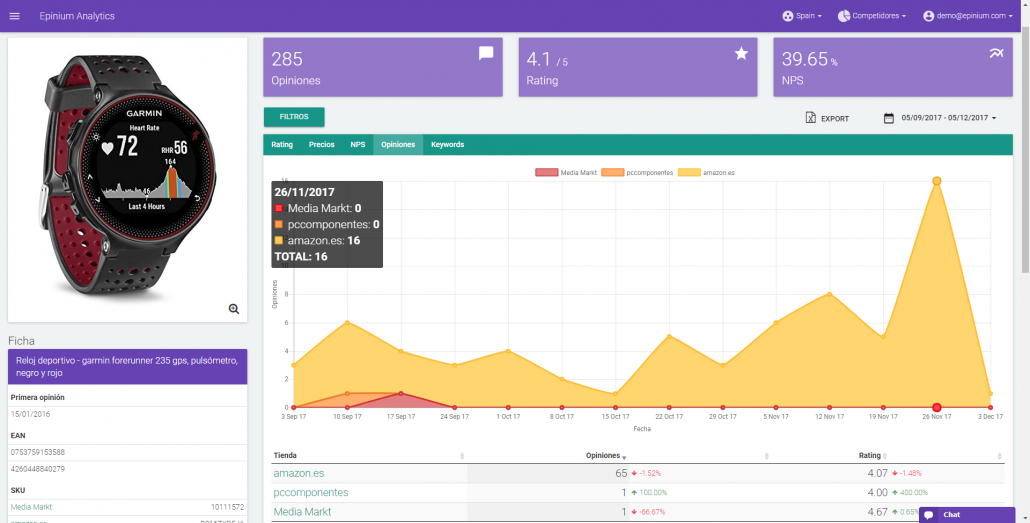 Click here to have your product’s consumer feedback analyzed!

In the case of Spain, the difference in the equipment of the runner were due to the sports watch with GPS. It is the country where the highest percentage of runners has one, unlike in Germany where there is a large percentage of runners who use the smartphone to track their workouts. Also, Spanish runners were the ones who spend more money on this type of product. Before Black Friday, the Spanish runner chose the Polar M400 with a price tag of 135€, which was reduced to 97€ on Amazon during Black Friday. In spite of that heavy discount during the promotion period, Spanish runners then chose the Garmin Forerunner 235 that cost between 219€ and 234€, but was then reduced to 118 € by Amazon and Media Markt.

On the contrary, German runners kept on buying the Garmin Vivosmart HR for 110€ although it didn’t have any discount during the promotion period. 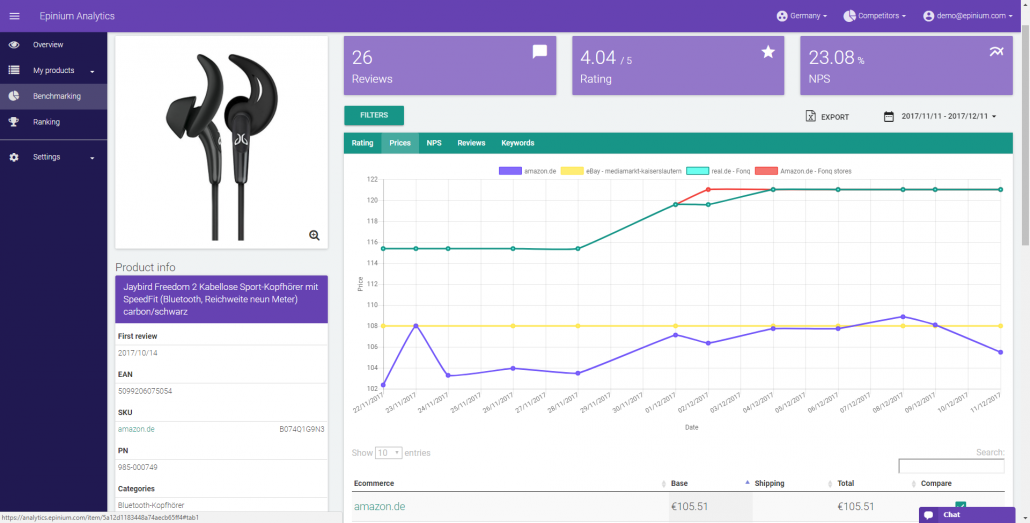 German runners spent the most money on sports headphones compared to runners in the other countries. While Spanish runners are satisfied with the Sony Walkman NW-WS413L headphones on offer during Black Friday for 70€, German runners chose the Jaybird Freedom 2 that could be purchased for 103€ on Amazon.de during the promotion period.

The results of the study done by Epinium show how consumers reacted differently to the latest Black Friday offers based on their country of origin and their habits.

Click here to have your product’s consumer feedback analyzed!

Want to join the discussion?
Feel free to contribute!

This site uses cookies. By continuing to browse the site, you are agreeing to our use of cookies.

We may request cookies to be set on your device. We use cookies to let us know when you visit our websites, how you interact with us, to enrich your user experience, and to customize your relationship with our website.

Click on the different category headings to find out more. You can also change some of your preferences. Note that blocking some types of cookies may impact your experience on our websites and the services we are able to offer.

These cookies are strictly necessary to provide you with services available through our website and to use some of its features.

Because these cookies are strictly necessary to deliver the website, you cannot refuse them without impacting how our site functions. You can block or delete them by changing your browser settings and force blocking all cookies on this website.

These cookies collect information that is used either in aggregate form to help us understand how our website is being used or how effective our marketing campaigns are, or to help us customize our website and application for you in order to enhance your experience.

If you do not want that we track your visist to our site you can disable tracking in your browser here:

We also use different external services like Google Webfonts, Google Maps and external Video providers. Since these providers may collect personal data like your IP address we allow you to block them here. Please be aware that this might heavily reduce the functionality and appearance of our site. Changes will take effect once you reload the page.